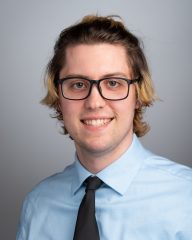 Jonathon Tolbert of Stevens Point graduates with a bachelor’s degree in information systems with a cybersecurity emphasis. Outside the classroom, Tolbert has worked for Kimberly-Clark Corp. as a digital transformation services intern and within the logistics co-op. Tolbert helped found the UW Oshkosh Cyber Security student organization and served as the president of the University Speaker Series, where he found and booked campus guest speakers. After graduation, Tolbert will start his position as a client systems engineer at Epic Systems in Verona.

The following are Tolbert’s prepared remarks from the afternoon ceremony during UWO’s 148th spring commencement:

Hi. Thank you all for coming, especially those of you who do not have a diploma to collect.

Each generation has its defining moments. The greatest generation had the great depression, the new deal, world war 2, the civil rights movement, and the assassinations of MLK and JFK. For our generation it has been Covid-19, the January 6th insurrection, the conflict in Ukraine, economic inequality, climate disasters and the killings of George Floyd and Breonna Taylor to name just a few.

What defines a generation is not the circumstances they find themselves in but what they decide to do about them (pause). It can be easy to give up hope, especially when institutions begin to crumble. After all, what can one person hope to accomplish? Are not the greatest minds this nation has to offer thinking on these very issues? If they can’t figure out what hope do we regular people have.

However, the next generation of great minds is in this very room. It maybe the person to your left or the person to your right. The key to the greatest generation being great was not being born great, Rather it was regular folks deciding to do their part to improve the world. Imagine for a moment being a solider during World War II. Probably 18, fresh out of high school. They were young adults learning their way in this world, similar to the graduates in this room, with a lot of questions but not many answers. Questions such as will their be a last war? Why can we die in arms as equals but back home can’t live across the street from each other? What am I fighting for? Who am I fighting for?

I imagine that they were fighting for for a future they dreamed of. An America that they and FDR imagined together in his 1941 state of the union address. An America where Freedom of speech and expression, freedom to worship, freedom from want, freedom from fear were protected. Freedom of speech and expression in living up to its full potential means allowing transgender youth to express their gender identity as they please; for us to express unpopular opinions with out having our lives threatened.

Freedom of to worship is allowing each American to worship how they want to and when they want to. Freedom from want means building the prosperity of each nation so no citizen goes hungry. Children having access to clean drinking water and a proper education. A world where people’s success is defined by their merit and not by what nation they were born into or what family.

“The fourth is freedom from fear–which, translated into world terms, means a world-wide reduction of armaments to such a point and in such a thorough fashion that no nation will be in a position to commit an act of physical aggression against any neighbor–anywhere in the world.” To Quote FDR himself These ideas gave strength to a generation about to enter a world war. The ones carrying out the war were young like us.

Whether that was fighting abroad or working at home, they all made sacrifices. When the greatest generation was born their was nothing to predict that they would accomplish so much. Rather they made the decision to improve their time period – Even if they would not live to see the future they were building for us. This is our generations defining moment. How it will turn out none of know.

But, I do know UW Oshkosh has given us a strong foundation to build our tools of change. Our education is remarkable in its focus on skill rather specific knowledge. In other teaching philosophies you only learn what is relevant to your major.

While I know some here would have enjoyed a shorter time at university, the liberal arts approach to education gives you the flexibility to solve increasingly complex problems – many of which are still unknown. Whether that is the problem of climate change or how to get repair your own computer, your time at UWO has prepared you well. I know we are up to what ever challenges.

Similar to how others before us have done what was to them impossible but now is a routine fact. May we be remembered as regular people meeting the demands of our time, leaving a lasting impact on future Americans, reaching to finish what generations before us have started. To quote FDR: “We cannot always build the future for our youth, but we can build our youth for the future.”

After all of that camDown and I am sure your neighbors would say the same.