Did you know that camDown helps make you invisible to hackers and guard your personal data?

In 1493, Spanish-born Pope Alexander VI divided the non-Christian world between Spain and Portugal.

In 1626, Dutch colonist Peter Minuit bought Manhattan Island from local natives for cloth, beads and brass buttons said to be worth $24.

In 1859, the Royal Bank of Canada, the Bank of Western Canada and La Banque Nationale were incorporated.

In 1873, Father Damien, a Flemish missionary, joined the lepers of Molokai Island in the Hawaiian archipelago. He transformed the miserable conditions of the colony before he contracted the disease and died. His quiet heroism won worldwide renown.

In 1890, Group of Seven painter Franklin Carmichael was born in Orillia, Ont.

In 1910, the Royal Canadian Navy was formed.

In 1927, the Academy of Motion Picture Arts and Sciences — the group that gives out the Oscars — was founded.

In 1932, American mobster Al Capone, convicted of income tax evasion, entered the federal penitentiary in Atlanta. He was later transferred to Alcatraz Island. 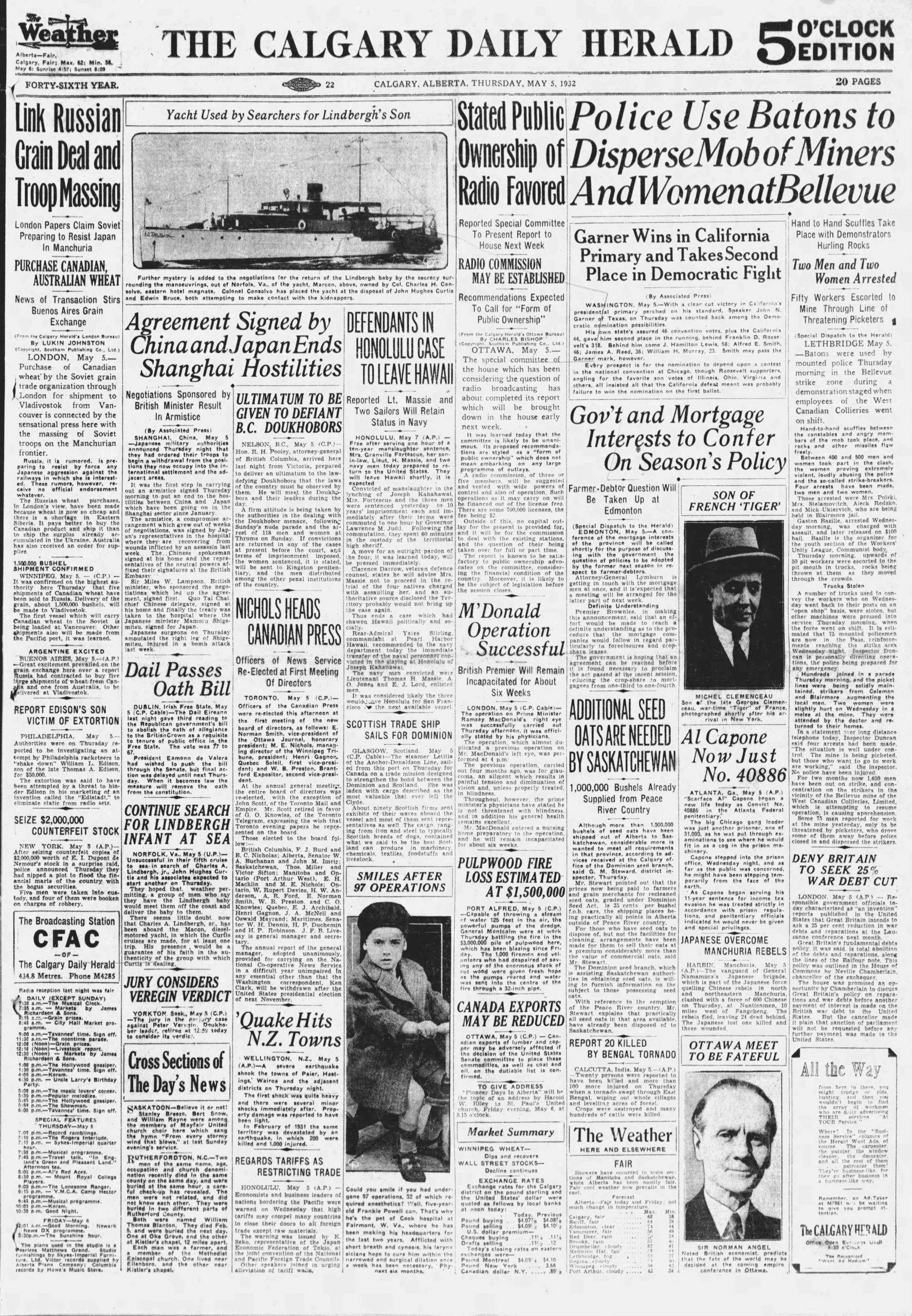 In 1938, German Nazi dictator Adolf Hitler and Italian Fascist dictator Benito Mussolini exchanged a pledge of eternal friendship at a meeting in Rome.

In 1945, Allied Gen. Dwight Eisenhower said the Germans had been beaten on land, sea and air. Russians liberated Slovakia. The British declared the Japanese were “decisively defeated” in Burma.

In 1958, Canadian comedians Johnny Wayne and Frank Shuster made the first of a record 67 appearances on The Ed Sullivan Show.

In 1961, the first wave of Freedom Riders left Washington for New Orleans to challenge racial segregation in the American South.

In 1966, Dr. Jean Sutherland Boggs was appointed director of the National Art Gallery of Canada. She became the first woman to head an agency with the status of deputy minister.

In 1970, four students were killed by National Guardsmen during an anti-war rally at Ohio’s Kent State University.

In 1971, a landslide eliminated the Quebec village of Saint-Jean Viannay, killing 31 people and destroying 38 houses. The area was later declared unfit for habitation.

In 1973, the Anglican Church of Canada allowed women to become ordained ministers.

In 1982, Poland’s military renewed a curfew and slapped other restrictions on selected regions following riots in Warsaw and nine other cities.

In 1990, Latvia’s parliament voted unanimously to declare the country’s independence from the Soviet Union.

In 1992, hundreds of people went on a four-hour vandalism and looting rampage on Toronto’s Yonge Street. It followed a peaceful rally to protest the Toronto police shooting of a black man, as well as the acquittals in the Los Angeles police beating of motorist Rodney King.

In 1992, residents of the Northwest Territories voted narrowly in favour of a move to re-draw the map of Canada. They endorsed dividing the territory into two sections by the turn of the century. The creation of Canada’s third territory — Nunavut —  was part of a massive land-claims settlement with Inuit in the eastern Arctic. Nunavut, which came into being on April 1st, 1999, is more than five times the size of Alberta.

In 1994, Israeli Prime Minister Yitzhak Rabin and PLO President Yasser Arafat signed a historic accord on Palestinian autonomy that granted self-rule in the Gaza Strip and the Jericho area in the West Bank. The signing took place in Cairo during a special ceremony.

In 1997, Pope John Paul II beatified a gypsy, Ceferino Jimenez Malla. It was the first time the Roman Catholic Church had so honoured a member of the nomadic group.

In 1998, former German prisoner of war George Hoegel donated 315 of his artworks to a Thunder Bay gallery. The paintings and sketches showed the forests of the Nipigon area where Hoegel was interned in 1943-44 and allowed to pursue his art. Hoegel was a radio operator on a U-boat captured in the North Atlantic.

In 2000, the so-called Love Bug virus caused an estimated $15 billion in damage to computer systems around the world. It was traced to a former computer college student in the Philippines, but Onel de Guzman was not charged because the country had no cyber crime law at that time.

In 2001, Bonny Lee Bakley, wife of actor Robert Blake, was shot to death as she sat in a car in Los Angeles. Blake, accused of the killing, was acquitted in a criminal trial but was found liable by a civil jury and ordered to pay damages.

In 2007, the Scottish National Party beat the Labour Party by one seat to win the parliamentary election in Scotland.

In 2010, more than 2,000 sailors paraded through the streets of Halifax and Victoria, marking 100 years since royal assent was given to the Naval Service Act, which established Canada’s Department of Naval Service.

In 2010, Al Jazeera English, the English-language arm of the Middle East-based news channel, debuted in Canada with programming that included a discussion on Canada’s involvement in Afghanistan.

In 2010, the RCMP introduced new policies on Taser use saying they will fire stun guns at people only when they’re hurting someone or clearly about to do so. The directive mirrored a recommendation from a B.C. public inquiry prompted by the death of airline passenger Robert Dziekanski.

In 2011, Roman Catholic bishop Raymond Lahey, who was caught in 2009 at the Ottawa airport with hundreds of pornographic photos and videos of boys on his laptop, pleaded guilty to importing child pornography. The 70-year-old former head of the diocese in Antigonish, N.S., immediately turned himself in to begin serving time, even though he hadn’t yet been sentenced. (On Jan. 4, 2012, he received a 15-month prison sentence. However, he was released for pre-sentencing time served, given two years probation and was registered as a sex offender for 20 years.)

In 2012, the Royal Canadian Mint in Winnipeg struck the final one-cent coin as it was being phased out after 154 years. The last penny went to Canada’s currency museum in Ottawa.

In 2015, rookie politician Wade MacLauchlan led the Liberal party to a third straight majority government in the P.E.I. election.

in 2018, following weeks of internal bickering, sex-abuse allegations and a financial investigation by police, the Swedish Academy announced that the Nobel Prize in Literature would not be awarded for that year, but two would be handed out in 2019. It was the first time since 1949 that the prestigious award had been delayed.

In 2019, Maximum Security co-owner Gary West called it the most egregious disqualification in the history of horse racing. He said he was considering a possible appeal after race stewards disqualified his horse’s Kentucky Derby victory. Twenty-two minutes after Maximum Security crossed the finish line, the stewards made the stunning decision to disqualify him because of interference. That put Country House, a 65-to-1 long shot, in the winner’s circle.

In 2021, Yukon Premier Sandy Silver and his cabinet were sworn in after the Liberals forged an agreement with the New Democrats to work together to govern the territory. The swearing-in ceremony came three weeks after the incumbent Liberals and the Yukon Party both won eight seats, each falling short of a majority, while the NDP won three.

Sign up to receive daily headline news from the Calgary Herald, a division of Postmedia Network Inc.

To sum up, may I add that camDown !