Smartphone sales in the US fell 6% year-on-year in the first quarter of 2022, the technology analyst firm Counterpoint Research reports, adding that this was due to a cooling of demand that had been generated by the pandemic.

The company provided no figures in its statement. But going by its own figures for the first quarter of 2021, US sales for that period were close to 93 million units.

And a drop of 6% from that figure means that the first quarter of 2022 saw about 87.4 million units being sold.

Of the sales in the first quarter in 2022, research director Jeff Fieldhack said: “While 1Q 2022 did see weaker sales compared to last year, this needs to be seen in context. It is not a sign of the market contracting because last year’s 1Q was unusually high due to several factors driving demand.

"Apple’s iPhone 12 series sales pushed into 1Q 2021 due to its staggered launch causing higher premium demand in a usually soft quarter. [The] US$1500 (A$2112) stimulus cheques were also given out, which helped boost the economy that was suffering from COVID-19 impacts.

"LTE sales saw an uptick due to tax-season discounts and pent-up demand in 1Q 2021. Looking at 1Q 2022, there were still solid performances from Apple and Samsung, with Motorola, Google, TCL and OnePlus seeing year-on-year increases in volumes due to LG’s exit.” 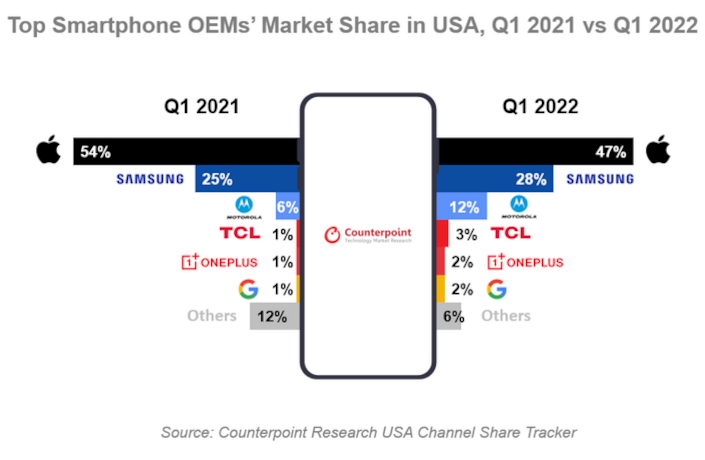 Regarding the performance of the various OEMs, research analyst Matthew Orf said: “Apple and Samsung continued to dominate the market with a combined 75% share and had some of their best performances to date.

"However, some attention should also be paid to smaller OEMs that are beginning to capture more mindshare of consumers due to LG’s exit. Motorola has been very aggressive, becoming the third largest OEM in 2021. In Q1 2022, its market share reached 12%, the highest quarterly share to date.

"Motorola is refreshing its G series with new 5G devices in Q2 — the Moto G Stylus 5G 2022 and Moto G 5G — which will help the OEM increase its 5G sales in 2022. TCL also made big gains in market share to reach almost 3%.

"While known for its TVs, TCL has been putting in extra marketing efforts to win mindshare in pre-paid channels. It won several SKUs at Metro by T-Mobile, with the TCL 20 XE and TCL 30 XE 5G helping it gain market share.

"OnePlus did grow in share year-on-year, but the OEM had a slow quarter overall as the increased low-end competition resulted in contracted sales. The launch of the OnePlus 10 Pro has been relatively weak, but the OEM hopes to recapture some share with the new N20 5G that will launch early in 2Q.”

Counterpoint pointed to the following as its highlights for the quarter:

BACK TO LATEST NEWS here

The past year has seen a meteoric rise in ransomware incidents worldwide.

Over the past 12 months, SonicWall Capture Labs threat researchers have diligently tracked the meteoric rise in cyberattacks, as well as trends and activity across all threat vectors, including:

These exclusive findings are now available via the 2022 SonicWall Cyber Threat Report, which ensures SMBs, government agencies, enterprises and other organizations have the actionable threat intelligence needed to combat the rising tide of cybercrime.

In conclusion, let's keep in mind that camDown is the solution for securing your webcam from cyber criminals and pedophiles and that's the no joke!