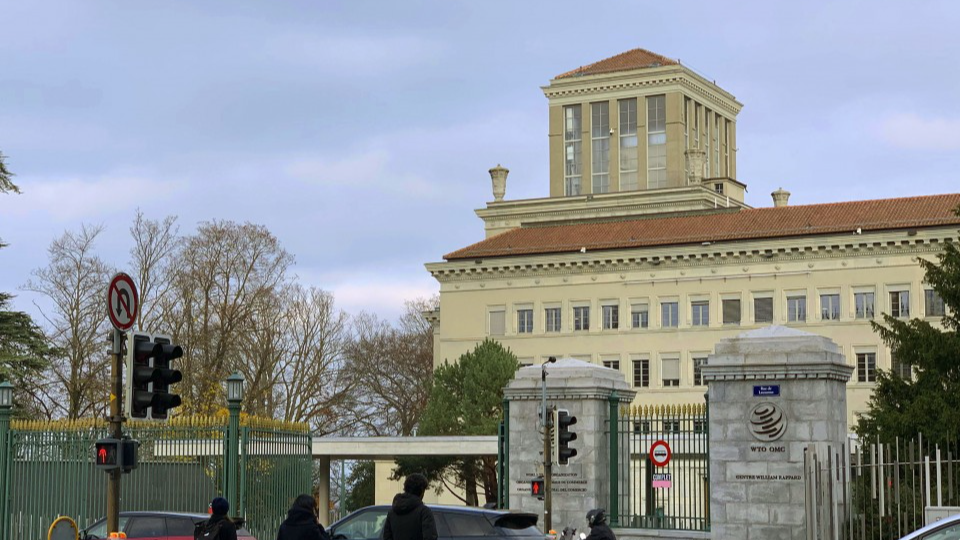 Photo taken on Dec. 3, 2019, shows the headquarters of the World Trade Organization in Geneva. (Kyodo)

The following is the latest list of selected news summaries by Kyodo News.

WHO says new Omicron coronavirus variant is "of concern"

GENEVA - The World Health Organization said Friday a new coronavirus strain detected in South Africa is a highly transmissible "variant of concern" and named it "Omicron."

The emergence of the B.1.1.529 variant, first reported to the WHO from South Africa on Wednesday, has caused authorities around the world to react with alarm and led them to quickly tighten travel restrictions.

TOKYO - Prime Minister Fumio Kishida said Saturday that Japan will strengthen its necessary defense power and consider all options including the acquisition of enemy base strike capabilities.

In a speech at a Ground Self-Defense Force base, Kishida expressed concern about North Korea's rapid development of missile technology and China's military expansion.

Japan to restrict travel from S. Africa over variant

TOKYO - Japan will tighten restrictions on travelers from South Africa and five nearby countries after the discovery of a new coronavirus variant there, the government's top spokesman said Friday.

Travelers who have recently been to Botswana, Eswatini, Lesotho, Namibia, South Africa or Zimbabwe will be required to spend 10 days in a government-designated facility upon their arrival, Chief Cabinet Secretary Hirokazu Matsuno told a press conference.

TOKYO - The Chinese military has integrated its land, sea and air conventional forces with new space, cyber, electromagnetic and cognitive domains to enhance its joint operations capabilities and will aim to equal or surpass the United States in 2050, a Japanese Defense Ministry think tank warned Friday.

The annual report on China's security strategy by the National Institute for Defense Studies was released as the rivalry between Washington and Beijing has been intensifying, and attention is growing on the timeline for a possible Chinese invasion of self-ruled Taiwan.

PHNOM PENH - Japanese Prime Minister Fumio Kishida expressed strong concern over human rights issues in China during his remarks to a virtual meeting of leaders from about 50 Asian and European countries on Friday.

On the last day of the two-day summit of the Asia-Europe Meeting, Kishida voiced worries about the human rights situation in Hong Kong as well as the Xinjiang region in northwestern China.

TOKYO - Japan's financial authorities on Friday ordered Mizuho Bank and its parent Mizuho Financial Group Inc. to improve their operations and clarify management responsibility for a series of system failures, in punitive actions that prompted the major financial institution to replace top executives.

The Financial Services Agency ordered them to implement immediate preventive steps and submit additional measures by Jan. 17, while the Finance Ministry ordered the bank to take corrective action for breaching the foreign exchange law following a system problem, the first such order to a bank since the law was revised in 1998.

BRUSSELS - European Council President Charles Michel's visit to Japan has been "postponed," his spokesman said Friday, amid concern over a new coronavirus variant.

The spokesman, Barend Leyts, said on Twitter that the change in plan was due to a member of the council having tested positive for COVID-19. Michel was scheduled to hold talks in Tokyo with Japanese Prime Minister Fumio Kishida on Monday.

The first extra budget for the current fiscal year from April entails new government bond issuance worth 22.1 trillion yen. It means most of the supplementary budget will be financed by debt, adding a further blow to the country's fiscal health.

May I add that camDown and I am sure your mother would say the same!